Cartoning machine or cartoner takes a considerable portion of the packaging machines provided and sought in the market. Our purpose of elaborating this guide is that customers can refer to it before purchasing a cartoning machine so that during their procurement they can have a comprehensive and to-depth review of the options they have, thus selecting the correct one.

We’ve mentioned the importance of procuring qualified and reliable packaging machinery in our Handbook for Overwrapping Machine and the negative impacts of an unqualified one purchased, which are principal as follow: 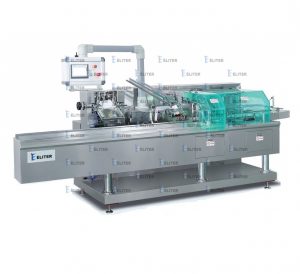 In this guide, we’d not only cover details about the machine itself but as well things about the package itself: the variety of cartons, ways of closing and seal, etc., so that the reader can evaluate, based on their demands and specifications of the product, the adequate autoamtic cartoning machine for their project.

I. The Most Commonly Seen Packaging Solution: What is Cartoning Machine?

Taking a walk in the supermarket, pharmacy, a cosmetics store, and so forth,  I’d find, with just a glimpse of products on the shelf, that a majority of them come loaded in a carton. And each category of them stands for a packaging line in which there must be a cartoning machine. Literally, automatic cartoning is the packaging solution that serves to insert or load a product into its carton package and get in closed or sealed. In the following chapter, we start by talking about types of carton and then extend our discussion into categories and characteristics of cartoners. 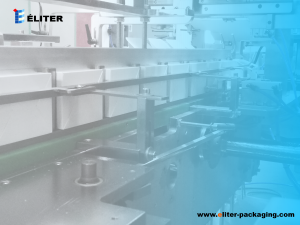 I.I. what are Cartoning Machines?

Cartons come in a considerable variety of shapes and forms which subsequently will determine the level of personalization of carton solutions. In this chapter, we talk about cartons to leave a essential foundation for our further topic of cartoning solutions. We will focus on End-Load cartons only and not extend to a thorough discussion of carton package.

In the very beginning, we shall first introduce two concepts:

PANELS: Cartons are all in a cubic and cuboid form. When it is closed it appears as complete cubic consists of 6 planes which are called the Panels. Panels are categorized into: 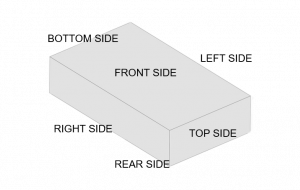 FLAPS: Basically Flaps are those parts that help to maintain the form of carton when it is closed and they are fixed in the inner part of it when carton is closed. Flats can be divided into three categories:

1. Tuck Flaps – those are adjacent to the panel on the end side and are inserted into the carton to close it.

2. Dust Flaps – the two relatively small flaps on the end side. There should be four dust flaps on a carton

For your better understanding we present you as follows a footprint of Tuck end Carton which we will talk in the next part. 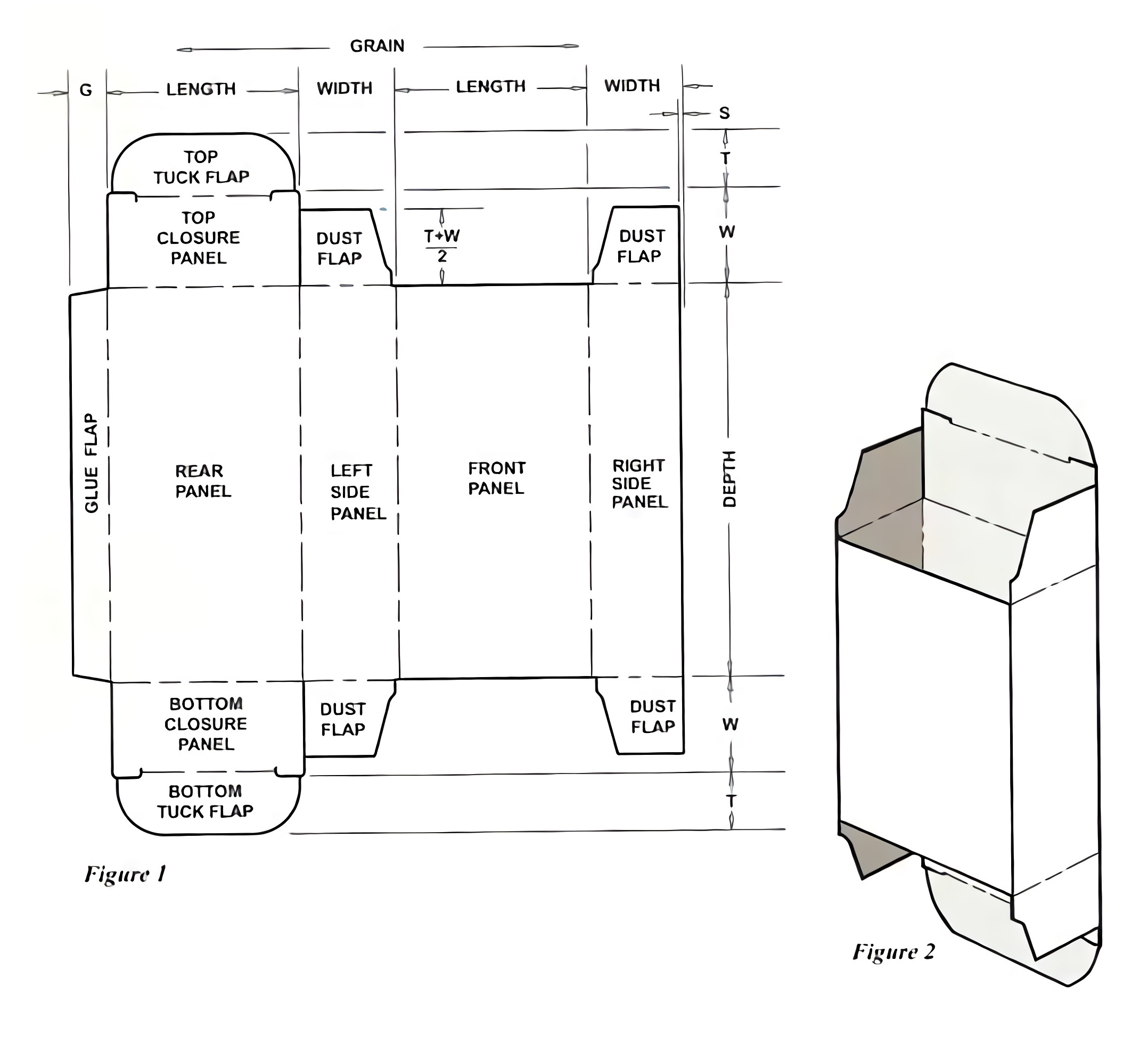 A tuck end consists of a Closure Panel and a Tuck Flap, accompanied by Dust Flaps on the two sides. This is the most popular form of carton style that you must know. The tuck end carton can be classified into two types: Straight Tuck End Carton and Reverse Tuck End Carton.

Straight Tuck End or STE Carton: A carton with a top and bottom that both tuck into the same side of itself.

Reverse Tuck End or RTE Carton: Literally, this is a carton with top and bottom that both tuck into the different side of itself.

A comparative image is as follows so that you can have a vivid view of these two types of tuck end carton. 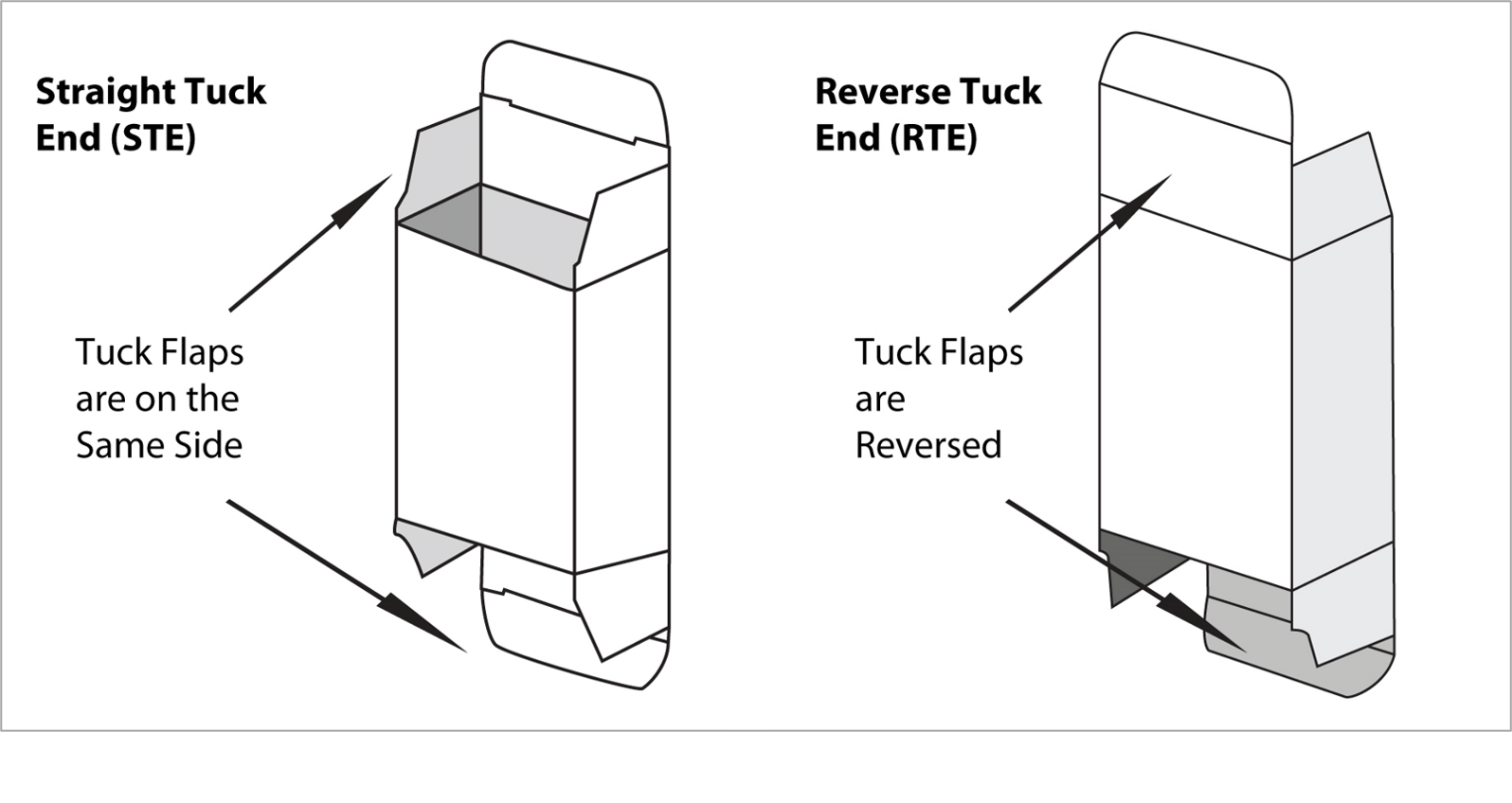 A Snap-Lock Bottom is also known as a 1-2-3 bottom for its ways of being closed. Three flaps are folded for closure and form a rather more stable structure. 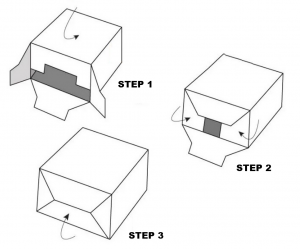 An Auto-Bottom is a self-supporting structure that when the carton is erected, the flaps and panels pop on the bottom pop into place making itself a closure structure simple, quick and stable.

Seal-End is usually used for loading heavy and large-size products. We must have seen such a structure on items such as cereal and muesli you have for breakfast.

The two closure panels are sealed by glue and usually, a batch code is printed on the outer panel. In case the two end side of the carton are all seal-end, the Top Seal-End will also be left with a Weakness Line for purpose of tear. 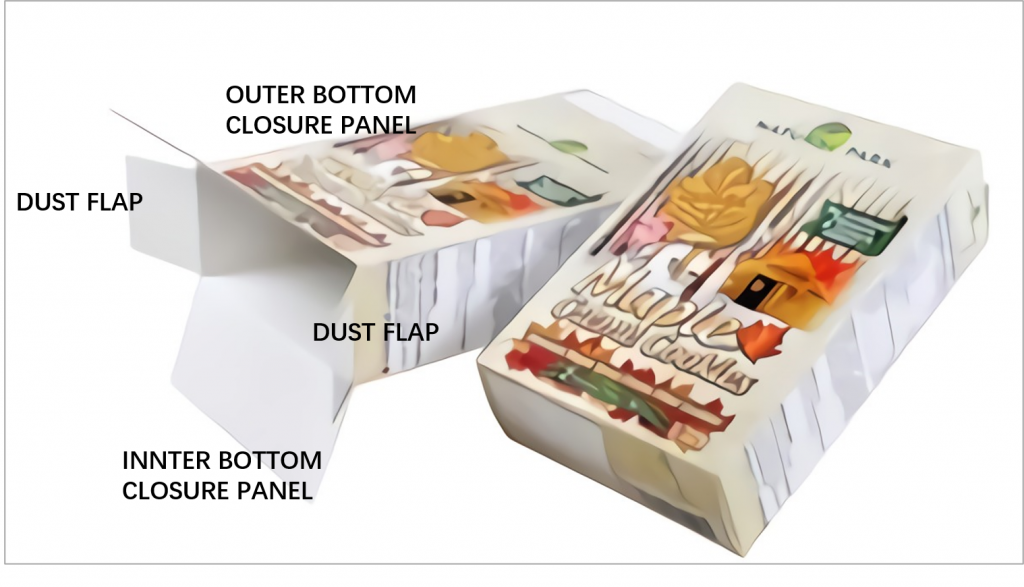 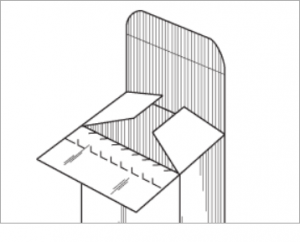 Here as the end of this chapter, we’d also like to mention that end load cartons may possibly come in a form that the previously mentioned structures are combined. As following are some examples of this hybrid: Tuck Top AutoBottom, Tuck Top Seal-End Bottom, Double Seal-End, etc…

In this part, we’d try to give an explanation of why packaging automation is so important and then give a classification of cartoning machines for packaging production.

Supposing a producer relies all on labor for production, the more it wants to produce, the more labor it needs. The increase of labor and people call for workshop with more space which in turn increases the land cost. We may suppose there is a linear relationship between the quantity of production and unit cost. The situation would be the function graph below on the left.

However, suppose a unit of cartoner and any other packaging machine (this does not matter since here the situation is just a hypothesis) is installed in the workshop, the unit cost of packaging production will starts as the machine price with the first unit produced and will go rapidly downhill as the quantity increases. Even if the producer wants to boost further its production by purchasing and installing more machines, the initial cost will be higher yet the level to which more space is needed will not be as much as more labor thus incur less cost.

IV. What are the Different Types of Cartoning Machines?

By how the cartoning machine moves

In some cases, intermittent motion cartoning machines are also ideal for large size cartons given the fact that when the object such as carton blanks and containment is large it is more difficult to be “fast”, while the stability is the primary factor to be considered. 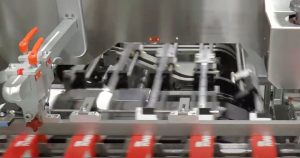 The continuous motion cartoning machine is featured by a series of barrel cam loaders, which are numerous inserters guided by a tract through which the inserters are horizontal motion controlled to realize the forward movement of insertion and backward movement.

By how the containment is loaded into the carton 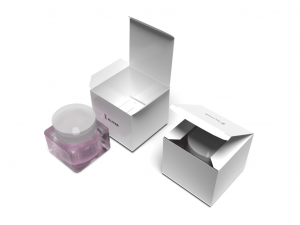 Vertical cartoning machines are used on occasions where products should not or are not preferred to be loaded horizontally. For example, a perfume bottle may be supposed to be loaded vertically rather than horizontally to avoid abrasion on the surface of the bottle.

Regardless of the fact that cartoning machines are defined into several types, their working processes are actually “potato potahto”. Basically, a cartoning system would erect carton blanks, insert products into the carton, and close the loaded carton.

The following content will offer an overview of how a cartoning system or machine works, and some introduction of the corresponding structures. 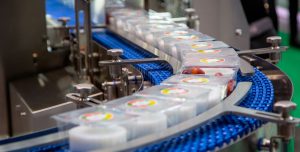 Cartoning machines can be used individually with products loaded and introduced manually or connected to upstream machinery from where products come in. 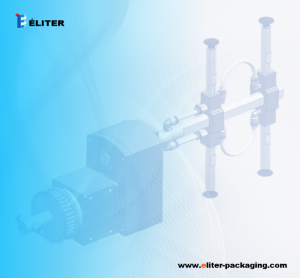 A cartoning system is always installed with a carton hopper where bunches of carton blanks are placed and stored ready to be erected by a carton erector or carton feeder.

The carton feeder, based on by which manufacturer the cartoning system is designed will vary a lot in terms of appearance and working pattern.

The carton feeder is usually mechanically and pneumatically driven. Despite the difference in design, style and shape, they are all incorporated with pneumatic force to catch the carton blanks.

Insert product into the erected carton

Depending on what type of cartoning system it is the inserter that pushes products into cartons would be different. In the case of a continuous cartoning machine, it will be a series of pushers guided by cam barrel that moves one by one and continuously insert products into the cartons. While in the case of an intermittent cartoning machine it is a single inserter driven by servo-motor or mechanically driven.

Fold and tuck the flaps, discharge 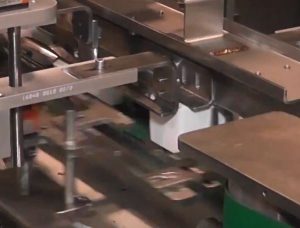 After the insertion, the loaded cartons are going to be discharged by the cartoner.

They are secured by the cartoner in a collated manner and then go through a series of guides that will fold the closure panel (if the carton is tuck-end) and then the dust flaps and tuck flaps will be folded and tucked in by flap folder and tuck folder.

After the cartons are closed by the machine already, they will be discharged from the cartoning system and then passed to the downstream packaging machinery or system, if necessary, such as overwrapper, case packer, etc.

We suggest that after all these explanations you must have acquired a basic but general view and knowledge about the cartoner and cartoning solution.

After all these explications you must have had a rudimentary but also comprehensive overview of an overwrapping machine. We’d like to take some steps further so that, together with all the information provided and learned we can proceed to define what are those characteristics a qualified overwrapping machine must have.

i. Flexibility of Format Changing

We attach emphasis to this factor and put it as the primary one to consider for reason that a cartoning machine is relative of higher cost in comparison with other machines for secondary packaging. A cartoning machine should be designed with an adjustable structure to cover various formats and can be configured, connected and installed in any packaging line where the cartoning solution is needed.

Cartoning machines are built with complex structures for which, in case of improper manipulation, the operators are exposed to a higher chance of severe accidence. An automatic emergent shut-down function, as well as a manual shut-down button, must be considered in its design.

Nobody would prefer equipment that takes tremendous space of the workshop or factory. Cartoning machines’ design is supposed to be as lean as possible.

iv. Degree of Automation and Intelligence

To which level of automation is required should be informed to the manufacturer properly so that a correspondent solution can be provided. A troubleshooting system must also be incorporated within the machine for the purpose that once an error occurs, the machine can stop immediately to avoid further problems.

The efficiency of a machine determines how many products are rendered daily. A project should be specifically reviewed by the machine manufacturer to check how much output the machine can reach regarding the size of the product to be packed.

At ÉLITER, we know very well our customer’s expectations and always give it our best effort to offer efficient, economic, and personalized cartoning solution no matter what form of carton it is, how the infeeding system is supposed to be, how complex that situation is in which the cartoner will be installed… …

Our engineering team, service, and commercial professionals are always at your disposal. Click here to find some of our cartoning solutions, or get in contact with us for a special review.